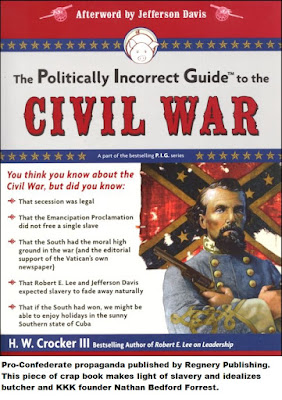 In my review of Dinesh D’Souza’s film Hillary’s America: The Secret History of the Democratic Party, I noted something ironic; the film used a graphic of notorious Confederate war criminal and Ku Klux Klan founder Nathan Bedford Forrest to illustrate what the current Democratic Party supposedly represents.  I mentioned that it resembled the illustration of Forrest on the cover of H. W. Crocker’s book The Politically Incorrect Guide to the Civil War (Note One). The book is an example of the worst kind of Lost Cause revisionism; I noted that the book was published by the preeminent conservative Republican publishing house Regnery Publishing and that the book was offered as a free gift to new subscribers to Human Events, a favorite publication of Ronald Reagan. That fact alone (Note Two) punctures the film’s claim that the contemporary Republican Party of Ronald Reagan is the party of civil rights.

Imagine my surprise when I discovered that the book version of Hillary’s America is published by Regnery! Let’s look at what this means: A book that accuses the modern Democratic Party of embodying the values of slavery, the KKK, and Jim Crow is published by a publishing house that actually embodies those values. This is hardly surprising considering  the Regnery family's long history of supporting white supremacy. This racial hypocrisy is hardly surprising. Both the book and film versions of Hillary’s America employ the same sophistry employed by Ann Coulter in her book Mugged:Racial Demagoguery from the Seventies to Obama. It turns out that Coulter (a Connecticut native) is a fervent defender of the Confederate flag and in her previous book Guilty: Liberal victims and Their Assault on America, Coulter defended the white supremacist group The Council of Conservative Citizens.

Note One: Crocker’s book has a nauseating chapter on Forrest. A sentence from the first paragraph of the chapter gives the tone of Crocker’s view of Forrest: “Nathan Bedford Forrest was certainly an extraordinary man, a Herculean hero of the American wilderness who blotted his copybook amongst the politically correct because of allegations stemming from his capture of Fort Pillow and his part in the original Ku Klux Klan.” Crocker presents Forrest as a courtly Southern gentleman and whitewashes his role in the atrocities of prisoners at Fort Pillow and his founding of the Ku Klux Klan.

Note Two: Regnery published at least two other books that epitomize Lost Cause mythology and Dunning School historical revisionism: The Politically Incorrect Guide to the South (And Why It Will Rise Again) and The Politically Incorrect Guide to American History. In October, Regnery is publishing a biography of Forrest, Busting Hell Wide Open by Samuel Mitcham. A one-star reviewer of one of Mitcham’s previous Civil War books (not published by Regnery) accuses the author of perpetuating the myth of the black Confederate soldier. However, I have not read either book and thus can’t comment on their contents.

Plus CultJam Productions' comix and film

Buy comix at our store
Posted by Les Zazous at 9:24 AM