Review of Dinesh D'Souza's Book The Big Lie: Exposing the Nazi Roots of the American Left

UPDATE: The review originally appeared on Amazon.com but was removed by Amazon.com 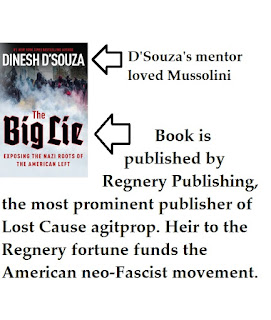 Troy Davis writes:
My Amazon review of Dinesh D'Souza's latest book The Big Lie: Exposing the Nazi Roots of the American Left is very popular; in fact, for a while Amazon listed it as the top negative review. The review includes a lot of information I previously wrote about D'Souza's publisher Regnery. Also, here is my review of D'Souza's film Hillary's America: The Secret History of the Democratic Party.
Posted by Les Zazous at 2:53 AM